We are spending the first two weeks of our trip working on a farm in the Northern Highlands of Ecuador. The farm is in a village called Guanabana, near a town called Pacto.  The estate, “la finca,” we are staying on is owned by an American who now lives in Ecuador with his family.  We have not met him or talked to him, but we have exchanged a few emails.  The following is an email he sent explaining how to get to the farm:

“Take Metrobus (blue) from La Marín to the North. The last stop is “Ofelia”.  At that station … ask for busees to Pacto.  On Sundays they leave every hour before noon.  … That Bus will drop you off directly in Pacto which is crowded on Sundays.  Find church one blocks from bus station…you cannot miss it.  At bottom of the church on the street are taxis…pick up trucks.  Just ask for one and tell them you want “Finca de Don Mateo”.  If they do not know … again… get them to bring you to the town of Guanbana.  There… anyone know how to get ot our farm…”

One of us is more concerned about the situation than the other. 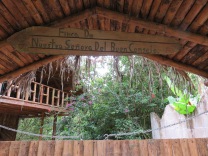 Predictably, we didn’t follow those directions exactly, but we did eventually get to the pick up truck taxis at the bottom of the church. Our driver did not know “La Finca de Don Mateo,” neither did the first few people we encountered on the way to Guanabana.  The driver has also never heard of “Guanbana” as the town is “Guanabana,” named after an Ecuadorian fruit.  The driver’s exchanges with the residents became shorter as we drove deeper into “the village” or up a dusty road into the Andean mountains.  At first,our driver was asking those we encountered if they knew the Finca de Don Mateo, then the Finca de Mateo, then Finca de Americano and finally, as he started to run out of patience, he asked about “Gringo Mateo”. “Gringo Mateo” did the trick.  Mateo was not at la Finca, but we were greeted by Jack, a volunteer from England.  Jack left for Quito the following morning.

We later found out we overpaid for our “taxi”;  a mistake we will surely make again and again throughout this trip. In any case, our adventure begins.